Two top officials at the Centers for Disease Control and Prevention were moving on and angry Democrats were calling out the U.S. Postal Service leadership Sunday as the U.S. COVID-19 death toll that inched toward 170,000.

Kyle McGowan, the chief of staff, and Amanda Campbell, the deputy chief of staff, resigned worked side-by-side with CDC Director Robert Redfield for two year, including the last eight tumultuous months as the virus overwhelmed the nation.

“Amanda and I spent more than two years serving at the CDC and chose to leave to start our own business,” McGowan said in a statement emailed to USA TODAY.

A sliver of help may be on the way for the relentless coronavirus testing issues hampering efforts to slow the U.S. outbreak. This weekend the Food and Drug Administration approved a saliva-based test that Yale University researchers hope will clean up some of those testing issues.

“This is a huge step forward to make testing more accessible,” said Chantal Vogels, a Yale postdoctoral fellow, who led the laboratory development and validation along with Doug Brackney, an adjunct assistant clinical professor.

📰 What we’re reading: Across the U.S., faith leaders are debating how they can continue to pray in fellowship with others while keeping staff and members safe in the age of coronavirus. Some churches have moved completely online, others have embraced drive-in service, and some are adamant about holding in-person gatherings.

Congressional Democratic leaders on Sunday called on the postmaster general and the head of the Postal Service Board of Governors to testify in a hearing about “dangerous operational changes.” Democrats say the changes threaten the integrity of the November election, which is expected to see a record-high volume of mailed-in ballots because of the pandemic. USPS officials have warned that some ballots may not be delivered on time due to election rules in some states.

In a joint statement, Democrats called on Postmaster General Louis DeJoy and Chairman of the USPS Board of Governors Robert Duncan to “testify before Congress about recent, sweeping and dangerous operational changes at the Postal Service that are slowing the mail and jeopardizing the integrity of the election.”

Two top staffers at the embattled Centers for Disease Control and Prevention have resigned to start a consulting firm. Kyle McGowan, the chief of staff, and Amanda Campbell, the deputy chief of staff, resigned effective Friday and are now featured on a website for Ascendant Strategic Partners. McGowan oversaw the day-to-day operations and served as the senior advisor to CDC Director Robert Redfield. The CDC has sometimes been at odds with the Trump administration, and recently was removed from its position as overseer of the nation’s COVID-19 data. McGowan, in a statement to USA TODAY, said the duo was not forced out.

“The CDC is filled with dedicated public health professionals,” McGowan said. “Amanda and I are honored to have had the opportunity to serve alongside each and every one of them.”

Single-family home sales in Colorado last month shattered state records and drove median home prices to record highs despite the sharp economic downturn brought on by COVID-19 related shutdowns, according to data from the Colorado Association of Realtors. Sales rose 15% from June and 21% from the previous July – before COVID-19 when the economy was rolling. Statewide the median home price rose a startling 4.5% in one month, to $443,925.

“There is a total disconnect with half the economy being crushed and yet, housing has mostly shrugged it all off, said Realtor Patrick Muldoon. “Small business is getting blown out, people are not working, and yet housing continues to be unaffordable.”

Rocky start for in-class learning as thousands forced to quarantine

It’s not even September and already thousands of students and teachers have been moved to the sidelines, just days after starting in-class instruction. Positive tests or coronavirus outbreaks have scrambled schedules and forced quarantines. More than 1,200 students at two Alabama schools were ordered to isolate days before school began. One school’s entire football team was forced to isolate after five players tested positive. More than 1,000 students in Cherokee County, Georgia, were forced to quarantine after scores of students and staff tested positive. And only a small fraction of districts across the nation have yet to begin the new school year.

“I definitely still say, ‘Give this a shot.’ I think there is a way to do this in person,” Carlo Wheaton, the parent of a junior at Georgia’s Woodstock High School, told WSB-TV in Atlanta after the school was forced to close. At least 14 people tested positive for the virus.

Italy, one of the world’s first hotspots, heating up again

Tourists arriving in Rome from Croatia, Greece, Malta and Spain lined up at Leonardo da Vinci airport to be immediately tested for coronavirus Sunday, one day after Italy’s daily new-case count topped 600 for the first time in three months. Italy was among the first and most severe hotspots for the virus in the spring, shutting down most of the country for weeks. Vacationers coming from abroad are fueling the current increase, authorities say.

Traditional school lunches and accompanying socializing are being re-engineered at schools that decide to open for in-person instruction. Most students will eat lunch in their classrooms or will sit by class in the cafeteria as schools try to prevent the spread of the novel coronavirus. Some other changes include mandatory handwashing and prepackaged meals. And the “cool lunch table” may be on hiatus.

“They need to have some space between the children because they have to take their masks off,” said John Christenson, medical director of infection prevention at Riley Hospital for Children in Indianapolis.

Testing for the coronavirus that causes COVID-19 has dropped nationwide the past two weeks even as the evidence builds disease spread is picking up in many states. In Mississippi, more than one in five tested for the virus in the past week were positive, the highest rate in the nation as of Friday. The average number of daily tests in Texas and Florida dropped but the ratio of positive tests in each state is more than double what the World Health Organization recommends. Official case counts have dropped nationally but reporting problems and generally reduced testing in some states makes it hard to confidently determine that infection rates are improving.

“The enhanced positivity rate is the thing that bothers people more than anything else,” said Dr. William Schaffner, a professor of preventive medicine and infectious disease specialist at Vanderbilt University School of Medicine. “Because it suggests this virus is circulating still very briskly.”

A saliva-based laboratory diagnostic test developed by researchers at the Yale School of Public Health to determine whether someone is infected with the coronavirus has been granted an emergency use authorization by the U.S. Food and Drug Administration. The method, called SalivaDirect, is being validated as a test for asymptomatic individuals through a program that tests players and staff from the National Basketball Association. SalivaDirect is simpler, less expensive, and less invasive than nasopharyngeal swabbing, the researchers say.

“With saliva being quick and easy to collect, we realized it could be a game-changer in COVID-19 diagnostics,” said Anne Wyllie, assistant professor and associate research scientist at Yale.

Birx: Masks should we born indoors and outdoors, in cities and rural areas

“So we are really asking all communities, whether you are urban or rural communities, to really wear a mask inside, outside, every day,” she said. “Much of the spread is asymptomatic. I know we all want to believe that our family members cannot be positive. They are.”

As schools across the nation struggle to find a safe way to educate students in-person, a Kansas teacher has dedicated herself to tracking school closings, cases and deaths in a budding national database.

“I was seeing a lot of articles about schools that were opening up and issues already happening on Day 1,” Alisha Morris, who teaches theater in Kansas’ Olathe School District said. “As I was researching, I thought, oh my gosh, this is happening all over.”

The project comes amid a torrent troubling news about the prospects of safely reopening schools. Experts have expressed skepticism that schools’ attempting to head off outbreaks using routine symptom screenings will have success. Nurses have described keeping kids safe at school an “uphill fight.” And — despite President Donald Trump’s push to open all schools — half of the Defense Department’s schools in America will not open for in-person learning.

Annual light display honoring victims of 9/11 is back on

The annual light display honoring victims of 9/11 is back on, officials announced Saturday, saying New York health officials will supervise this year’s tribute to ensure workers’ safety amid concerns related to the coronavirus pandemic.

“This year it is especially important that we all appreciate and commemorate 9/11, the lives lost and the heroism displayed ‎as New Yorkers are once again called upon to face a common enemy,” Gov. Andrew Cuomo said in a statement. The announcement came days after the National September 11 Memorial & Museum canceled the Tribute in Light over concerns the coronavirus might spread among crews creating twin columns of light to represent the World Trade Center in the Manhattan sky.

School district cancels classes after teachers refuse to show up

A school district outside Phoenix voted to return to in-person classes on Monday but has been forced to reverse course after pushback from staff. J. O. Combs Unified School District announced Friday afternoon that it would not open at all on Monday because too many teachers refused to show up. Superintendent Gregory A. Wyman in a statement said the district had received an “overwhelming response” from staff indicating that they did not feel safe returning to classrooms with students.

“Due to these insufficient staffing levels, schools will not be able to re-open on Monday as planned,” Wyman wrote. “At this time, we do not know the duration of these staff absences, and cannot yet confirm when in-person instruction may resume.”

On Facebook: There’s still a lot unknown about the coronavirus. But what we do know, we’re sharing with you. Join our Facebook group, Coronavirus Watch, to receive daily updates in your feed and chat with others in the community about COVID-19.

Sun Aug 16 , 2020
Justin Fields has resorted to creating an internet petition to advocate to play football this fall. The Ohio State QB created a petition on MoveOn.org directed to Big Ten commissioner Kevin Warren and school presidents and athletic directors in the conference under the #WeWantToPlay hashtag. The Big Ten was the […] 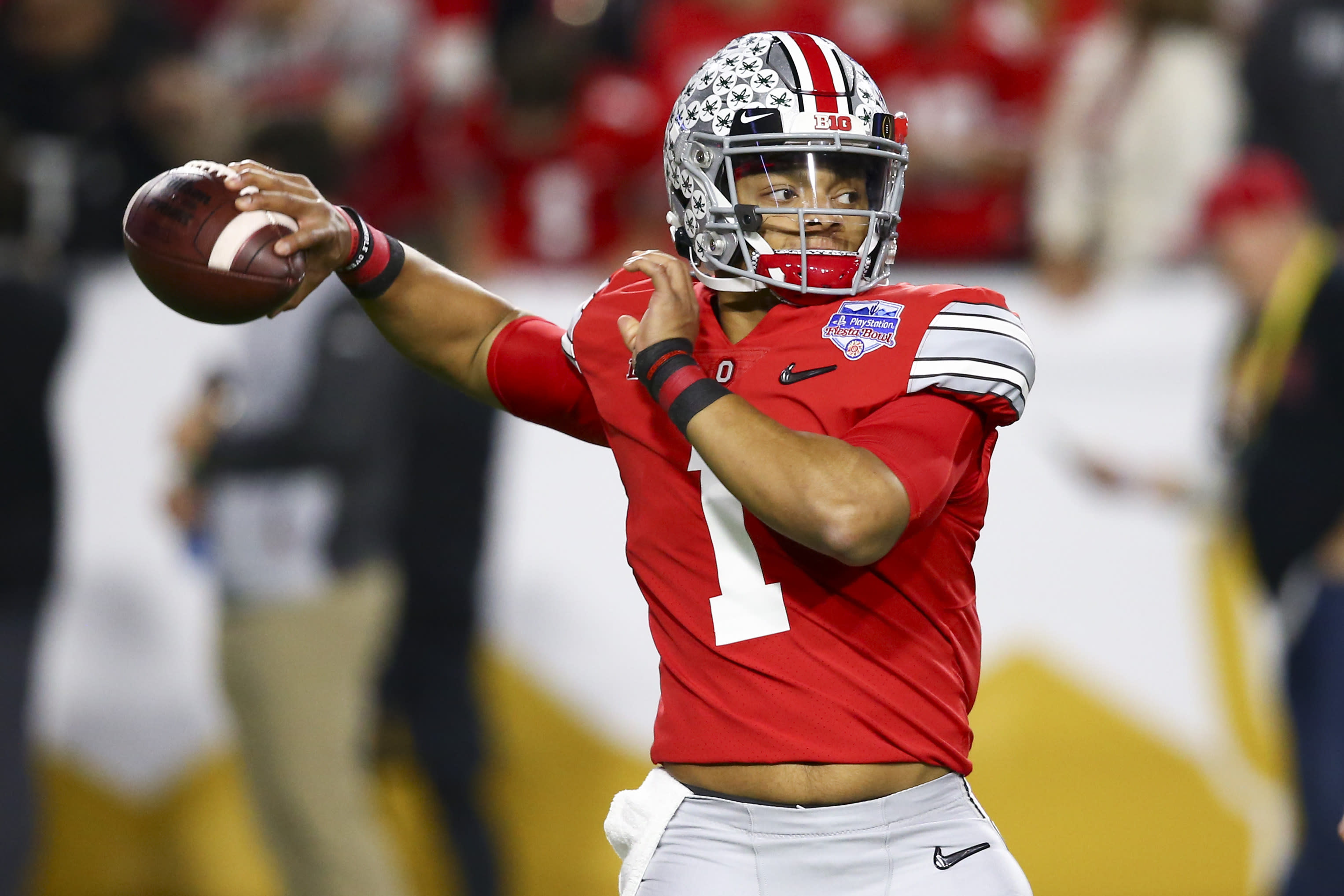