Talk about a rock and a hard place. This back-to-school season is unlike anything American parents have ever experienced. There are no good options. Whatever you choice you make, you’re a terrible parent according to your neighbor or another parent at your kids’ school or the internet. Whatever choice you make, you’re potentially harming your child emotionally or physically, or both. And, whatever choice you make, you’ll likely end up quarantined anyway and having your kids at home, doing virtual learning for extended periods of time. Because our country and its leaders flatly refuse to get their shit together.

You know where kids can go back to school just fine? New Zealand. Germany. Denmark. Vietnam. Because they actually flattened the curve (in some cases all the way down to zero) unlike the U.S., which did some sort of bizarre half-quarantine for the amount of time it should have taken to “flatten the curve” and then popped out of our houses and resumed normal life as cases continued to rise in the most non-flattened curve possible. Because there’s not even a damn curve. Just a giant, angled line that goes up and up and up as Americans frolic at beaches, have house parties with 25 people, and throw temper tantrums over wearing a mask at Target.

And parents are pissed. Rightfully so. We damn-near killed ourselves all spring doing the homeschool/virtual learning/e-learning thing while also working our regular jobs. But there was a light at the end of the tunnel—summer. And then come fall we’d have this shit under control and our kids would be able to go back to school, right? RIGHT?! And we held on to that hope because surely no one would ask us to keep doing the impossible for the 2020-2021 school year.

Everyone knows the value of in-person instruction. Unless you’d already chosen the homeschooling or online schooling route prior to the COVID-19 breakout, you likely had your kids in school. Every day of the week. All day. Being taught, in person, face-to-face, by professionals who have been trained to manage your child’s primary education in math, reading, writing, science, social studies, art, music, P.E., computer programming, etc. Likely, you do not want to be your children’s primary teacher. You do not have the training or patience or materials or free hours in the day to do so.

But even though we know our kids desperately need to have time with their friends and be taught in classrooms with their teachers, we aren’t willing to send them into the unpredictable and extremely unsafe COVID-19 germ-pit that schools will be within the first few hours of opening their doors. We also do not want to further risk the health and  safety of their teachers and school staff.

So here we are, forcing ourselves to accept a role we aren’t qualified for and that we don’t have the time or means to do properly because it’s our only option.

So yeah, rock. us. hard place.

But the worst part—the most frustrating part—is that we only have this one hellacious option because our government spent the past few months pissing away any and all opportunity to get this virus under control. Because the ability to accept that maybe he was wrong, maybe he misjudged, and maybe he needs to accept that medical experts who devoted their entire lives to fighting infectious diseases know more than he does, do not fit within the narcissistic delusion our president has created for himself. Being a leader in a pandemic doesn’t work if you solve all problems by buying your way through life, paying people off to shut up or go away, or merely firing anyone who dares to disagree with you. Being a leader in a pandemic means prioritizing the saving of lives over your own ego, it means listening to medicine and science, and it means working tirelessly to help your nation cope, endure, and recover.

None of which Donald Trump has done or frankly, seems capable of doing. He can’t simply “fire” the coronavirus, and he doesn’t know what to do.

In short, our kids can’t go back because our president sucks.

We’ve seen what leadership looks like around the world. We’ve seen footage of leaders—men and women—stand up in front of their people, telling them “I stand with you” and “we are in this together” as they enforce mask mandates and stay-at-home orders that are essential during a pandemic. And we’ve seen those nations crush the coronavirus, redeem their economies, send their people back to work, and their children back to school.

Our president literally said, “I accept no responsibility.” Everything is your responsibility, you childish buffoon. When 20 tiny children were gunned down in their school in 2012, President Obama wasn’t there when it happened. He didn’t pull the trigger. He didn’t know the shooter personally. There is nothing he could have done prior to this tragedy to stop it. But he absolutely stood up and accepted responsibility for coping, for healing, for moving forward as a nation, and for helping the families find justice and peace.

Because that’s what a president does when given this highest honor.

Parents nationwide see that other countries successfully got this disaster under control. We know it can be done. And we foolishly assumed, or at least hoped that all of our sacrifices in the spring and summer would mean our country was taking steps in the right direction.

“The implicit bargain of the spring was that if everyone complied with the shutdowns, the isolation, the social distancing, the working-while-parenting disasters and the rest, the government would use that time to build enough testing, tracing and public health infrastructure so that students could safely go back to school in person in the fall,” says Dana Stevens, an angry parent and writer for the Washington Post.

“So many of us did everything the government asked, and officials responded by doing . . . nothing. After a ‘Groundhog Day’ summer of no camp, no vacations, no sleepovers, no public pools, nothing to do with our children but wanly suggest another game of Scrabble, it turns out that the plan for getting them back to school was as vaporous as the rest of the coronavirus policy all along,” she adds.

Where is the plan from our leader about reopening schools? Where is the footage of you, Donald Trump, talking to school board members or administrators in charge of some of our nation’s largest school districts? The districts you bark at saying, “Open this fall or I’ll cut funding!” Where are the minutes or summaries from your talks with governors around the country, ensuring they have what they need to ensure schools open safely and teachers and students are protected?

There aren’t any, because you, like your pal Betsy DeVos, don’t actually care about America’s children or teachers. You both are prepared, without scruples, to throw them into the lion’s den this fall so you can create the illusion that our country is “back to normal” as your Hail Mary plan to save your presidency.

Meanwhile, Americans are drowning. We are drowning in debt, in exhaustion, in fear, in bills to be paid, and in anxiety over our children’s well-being. And you offer nothing. You offer no plan, no comfort, no leadership. Because you don’t actually know how to function as a true president, especially when faced with something your money can’t buy you out of.

This is why you are the worst president this nation has ever had. Not because of your shitty luck to have this pandemic occur during your administration, but because of your complete and utter failure in dealing with it. And because of your willingness to allow the children of your nation, the most innocent among us, to serve as lambs for the slaughter while you golf with Brett Favre.

“As late summer closes in, there’s a special flavor of rage as parents realize that we’re now being forced to advocate for the very outcome that, a few weeks ago, we were hoping against hope to avoid: keeping school all-online in the fall,” WashPo writer Dana Stevens says. And she’s right.

Personally, we hated online/virtual learning. My kids hated it. I hated it. I can’t believe I’m now advocating for the thing that proved to be so unbearably hard I can’t even remember the months of April and May as they flew by in an anxiety-fueled blur of 20-hour days where “productivity” in our home was high, but kindness, affection, quality time, and the meaningful talks that are so crucial to my kids’ mental health were basically non-existent because there was no time.

That’s the tornado we are heading back into since my husband and I, like parents all over America, both work all day long while our kids are “in school.”

That’s the disaster you’re putting us all in because your administration and handling of this pandemic has been a complete embarrassment and a failure that will be remembered for all time.

Imagine if you’d done something truly presidential, like implement a mandatory six-week lockdown with rigorous public masking. Experts (I know, they scare you, but the rest of us like them) say if we had taken such measures, we could have lowered infection rates enough to open schools safely, as other countries (Taiwan, South Korea, Denmark, Italy, Germany, France) have done. But instead you squandered away the past few months, doing nothing but whine on Twitter, fan the flames of racism, and absolve yourself of any and all responsibility as our country has circled the drain on a worldwide scale.

Donald Trump, you are a disgrace. And we, as a nation, have become a disgrace, emboldened by your crass “me, me, me” attitude. The only thing we’ve got going for us is that we are banned from entering pretty much any other nation, effectively rendering us an island with “closed borders” so maybe that will help stop the spread. For that, and for literally nothing else, I say thank you.

But don’t worry (not that you would), because parents across the country will do what we always do—take care of our kids. And teachers will do what they always do too—they’ll teach, as best they can.

Because we are resilient and we will survive this dumpster fire of a presidency you’ve put us through. You are no American “leader,” Mr. Trump. You are no “patriot.” And you won’t be able to stamp out the American spirit with your hateful rhetoric and complete disregard for your people. Our kids will go back to school at some point, and they will learn about you. They will grow up remembering what you did, and it will change them. They will forever know what happens when we prop up an egotistical maniac void of compassion, void of common sense, and void of the capacity to truly lead, in the White House. And they will do better when they vote and ensure that we never again have a such an unfit, corrupt president as you have proven to be.

So I guess we’ve got two things to thank you for.

See the original article on ScaryMommy.com

Fri Aug 7 , 2020
amanda kloots/instagram Nick Cordero and Amanda Kloots Amanda Kloots is giving fans a “sneak peek” of the home she bought with her late husband, Nick Cordero. On Friday, Kloots, 38, posted several photos of the house on her Instagram and shared with followers that she has started moving some of […] 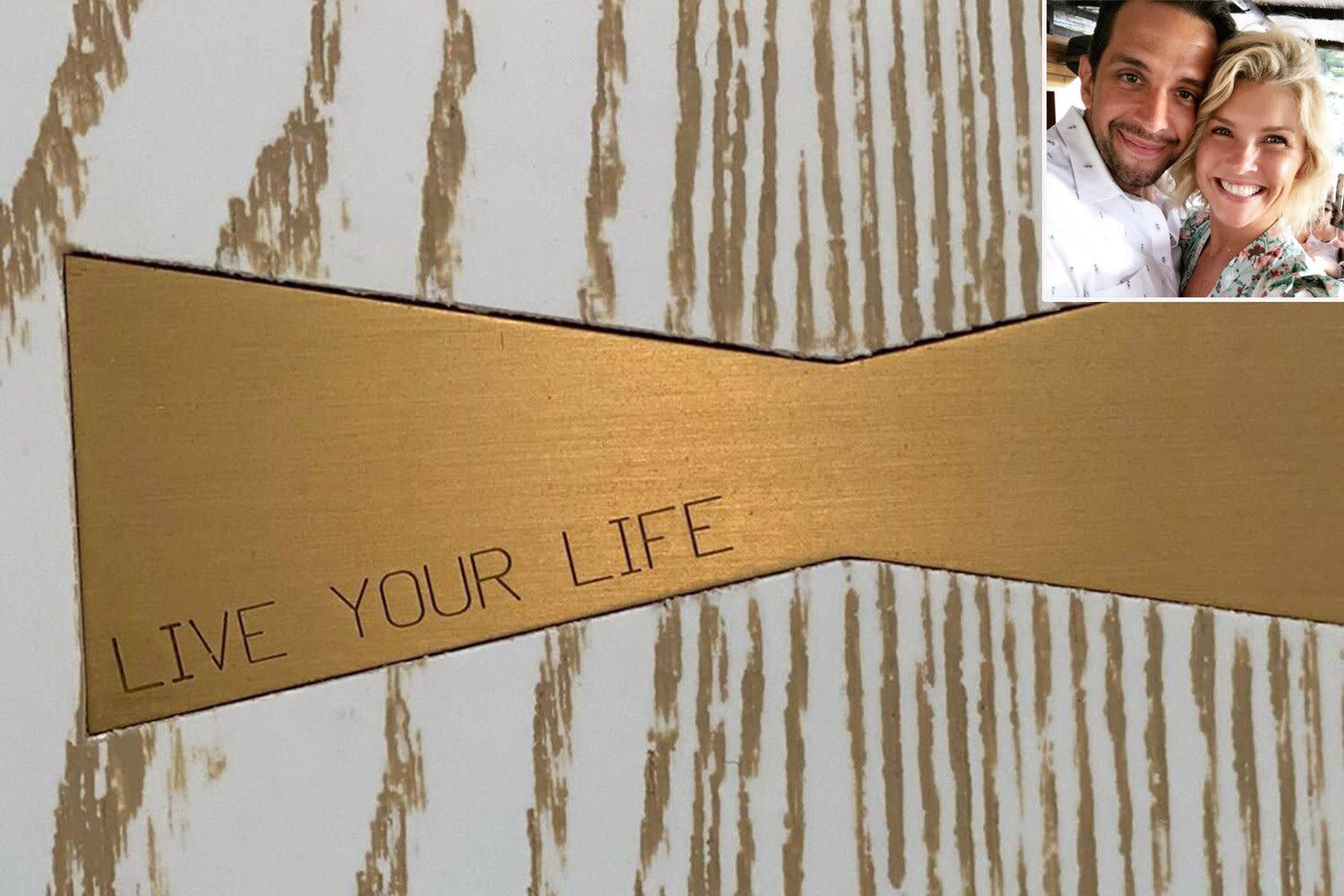