Los Angeles County sheriff’s deputies arrested a public-radio reporter as she covered protests that had erupted outside a hospital where two deputies were being treated for gunshot wounds suffered Saturday evening in an “ambush” attack.


The incident drew widespread condemnation from journalism organizations and prompted the sheriff’s chief watchdog to launch an investigation.

The reporter, Josie Huang, of KPCC and LAist, was taken into custody outside St. Francis Medical Center in Lynwood and released hours later. She received a citation for allegedly violating the obstruction law, Penal Code Section 148.

“That’s what surprises me the most is that once she was identified as a reporter that they transported her, that they cited her,” L.A. County Inspector General Max Huntsman said Sunday. The independent monitor oversees investigations into actions by the Sheriff’s Department.

The incident came a day after sheriff’s deputies in riot gear surrounded a news conference being held by activists. The speakers were condemning the department’s use of force against demonstrators who have been gathering regularly to protest the killing of Dijon Kizzee by deputies in South Los Angeles last month. At Friday’s event, one sheriff’s official grabbed a legal observer who had been filming him. When the news conference ended, the deputies ordered those attending, including reporters, to leave the area.

The inspector general’s office has opened investigations into the department’s conduct at the news conference, as well as its arrest of Huang, Huntsman said.

“Those two incidents are of concern to us because 1st Amendment rights are absolutely critical to the public’s respect of law enforcement,” he said. “And so we feel that requires immediate investigation.”

The office doesn’t have the power to prosecute or bring a lawsuit against the department, but its purpose is to provide information to the public. How long that may take is uncertain, Huntsman said.

“We have requested information from the Sheriff’s Department,” he said. “They have of late not cooperated in investigations of themselves so we do not anticipate their cooperation, and that makes things more difficult.”

Huang wrote in a series of tweets that she had been trailing behind deputies as they followed a man down the street when she saw a commotion ahead of her. The deputies had pinned the man down in the street and were arresting him. As she filmed the arrest, deputies shouted at her to back up and then shoved her, she said.

Video posted by KABC-TV Channel 7 showed multiple deputies then pinning Huang to the ground and handcuffing her.

“We saw one of the radio reporters that was here at the scene, she had rushed up to the police line there to see what was going on when she was suddenly taken down by the deputies,” said ABC7 reporter Leanne Suter. “We are not exactly sure what happened there, why they tackled her and put her into a patrol car, but that happened.”

Demonstrators had gathered outside the hospital where two Los Angeles County sheriff’s deputies were recovering from surgery. Both were critically wounded after being shot Saturday evening in Compton in what authorities described as an ambush that was captured on surveillance video.

The Sheriff’s Department’s relationship with the community has remained tense in the wake of several deputy-involved shootings, including the killing of Kizzee as he rode a bicycle in the Westmont neighborhood of South L.A. An attorney for Kizzee’s family has said he was shot at 15 times as he ran away.

On Thursday, sheriff’s detectives shot and killed a man who they said opened fire on them as they served a search warrant in Compton.

In June, video surfaced of three sheriff’s beating a man who was handcuffed and lying face down on the pavement, sparking outrage and prompting Compton city leaders to call for the deputies’ “immediate removal.”

“We are tired of dodging sheriff’s cars that have no regard for traffic laws or personal property, being snatched out of our cars, having our vehicles illegally searched, being threatened and intimidated, beaten and in some cases murdered,” Compton Mayor Aja Brown said at a news conference.

In the wake of Saturday’s shooting, Brown said she was “devastated to learn of the tragedy” and that the city would be working with the Sheriff’s Department to find and arrest those responsible.

The Sheriff’s Department said on Twitter that some of the protesters blocked entrances and exits of the hospital Saturday, but that could not be independently verified.

Video from the scene shows a small group of people approaching a driveway leading to the hospital before security officers block them from entering the campus. The security officers are then replaced by sheriff’s deputies, at least one of whom points a weapon at the group while some of those gathered shout obscenities and call the deputies names. Huang can also be seen approaching the group and asking for an interview.

The situation becomes more tense as sheriff’s deputies order people to back up and then begin shoving them. One deputy appears to strike a man with a baton.

Deputies were trying to arrest a protester who refused to comply with an order to disperse, the department tweeted, when Huang “ran towards the deputies, ignored repeated commands to stay back as they struggled with the male and interfered with the arrest.”

The department said that Huang did not identify herself as a member of the media and lacked “proper” press credentials.

That account was directly contradicted by videos Huang shared on Twitter, which showed that she did not intervene in the man’s arrest but instead was filming from a distance. As deputies take her to the ground, she can clearly be heard identifying herself as a reporter with KPCC and screaming for help.

“After my phone drops, it keeps recording and it captures two deputies damaging my phone by kicking and stepping on it,” she wrote. “I can hear myself in the background shouting: ‘You guys are hurting me’ and ‘Stop it.'”

As Huang was being put into the patrol car, she could be seen wearing a lanyard around her neck with a badge attached to it.

The Greater Los Angeles Chapter of the Society of Professional Journalists said in a statement that it was “deeply troubled by news reports and on-the-scene video that details what clearly seems to be inappropriate use of force to subdue and arrest” Huang.

“SPJ/LA takes special note that this is at least the second time that a journalist of color from this news organization was mistreated and injured while reporting on civil protests,” the statement said.

In June, a Long Beach police officer shot KPCC reporter Adolfo Guzman-Lopez in the neck with a rubber bullet while he was covering an anti-police-brutality protest. The department later apologized and pledged an investigation.

“This action by the Sheriff’s Department demands attention both for what appears to be an excessive use of force, and as a serious threat to the First Amendment, which protects the press, free speech, and the right to protest,” SPJ/LA said.

Herb Scannell, chief executive of Southern California Public Radio, said in a statement that the charge against Huang should be dropped. “Her arrest is the latest in a series of troubling interactions between our reporters and some local law enforcement officers,” he said. “Journalists provide an essential service, providing fair, accurate and timely journalism, and without them, our democracy is at risk.”

Huntsman described the events as the latest turn in a polarizing cycle that had seen law enforcement officers and civilians spinning further away from each other.

To break the pattern, Huntsman said, it’s crucial to stress the importance of following the law, and that applies to members of the public and sworn officers.

“As long as law enforcement doesn’t follow the law as to itself, it’s difficult to convince the public it’s legitimate and maintain the best protection law enforcement officers have against violence from the public, which is that feeling they are legitimate, that they’re not an enemy of the public but are representing the public,” he said, adding that the Sheriff’s Department should respond to questions from his office and the press with enthusiasm rather than anger.

“I hope we can get through this process of yelling at each other and get to a point where the government is more responsive to the laws and the desires of the public.”

Tue Sep 22 , 2020
Going to the dentist has never been what we’d call a good time, but, amid the COVID-19 pandemic, it’s a more loaded endeavor than ever. After all, there’s no way to mask up while getting your teeth cleaned, which means you’re more vulnerable to potential coronavirus exposure than you might […] 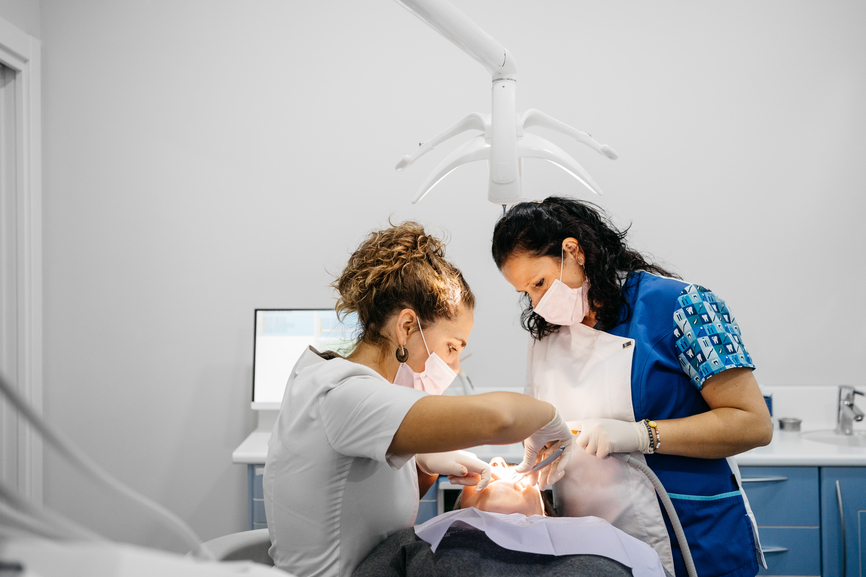