On the heels of creating an online petition to try to save the Big Ten’s fall football season, Ohio State quarterback Justin Fields went into greater detail about his effort during a Monday morning interview with ESPN Radio.

The petition Fields authored Sunday was to the point, saying Big Ten teams and individual athletes should be allowed to “make their own choice as to whether they wish to play or opt out this fall season” amid the coronavirus pandemic.

“We want to play,” Fields wrote in the petition directed to Big Ten commissioner Kevin Warren and conference presidents and athletic directors. “We believe that safety protocols have been established and can be maintained to mitigate concerns of exposure to COVID-19. We believe that we should have the right to make decisions about what is best for our health and our future. Don’t let our hard work and sacrifice be in vain.”

On Monday, Fields told ESPN’s Zubin Mehenti, Keyshawn Johnson and Jay Williams that he doesn’t understand why the Big Ten cannot field a season while other conferences feel like they can. Last week, the Big Ten and Pac-12 announced that they will not have fall sports seasons while leaving open the possibility of pushing them to spring. Meanwhile, the ACC, Big 12 and SEC are cautiously carrying forward with preparations for a season.

“If the SEC, ACC and Big 12 all think that we can have a season safely, then I don’t see any reason why the Big Ten can’t do the same. I think what we’re doing at Ohio State is very safe. If we can get everybody in the conference on the same track, I think that will be a safe way to conduct the season” Fields said.

“If the SEC, ACC and Big 12 all think that we can have a season safely, then I don’t see any reason why the Big Ten couldn’t do the same.”

During the interview, Fields said he understands the risks associated with COVID-19 but feels like he is safer being with his teammates at Ohio State’s football facility than “off campus just doing whatever,” per Eleven Warriors.

It’s hard to envision Fields playing for the Buckeyes in the spring. The junior is a heralded NFL prospect who is viewed as one of the top prospects at his position in the country. With the 2021 NFL draft in such close proximity to a projected spring schedule, the risks would outweigh the rewards for Fields.

Fields isn’t the only one who has spoken out about the Big Ten’s decision and the lack of clarity behind it. Parents from OSU, Iowa, Penn State, Nebraska and Michigan have all called out the conference — Warren specifically — asking for answers and a reversal of the conference’s decision.

The letter from the Michigan parents, published Monday morning, called the Big Ten decision “premature” and asked for a video meeting with Warren with a “detailed description of the critical facts used to cancel the decision.”

Whether these efforts have any legitimate sway with the conference office remains to be seen. Warren has been criticized for the messaging behind the Big Ten’s decision, including the fact that it came just six days after the conference announced a full football schedule.

The conference statement announcing the decision cited “ongoing health and safety concerns” surrounding COVID-19. Several reported occurrences of myocarditis, an inflammation of the heart muscle, have also been cited as a factor.

“The mental and physical health and welfare of our student-athletes has been at the center of every decision we have made regarding the ability to proceed forward,” Warren said. “As time progressed and after hours of discussion with our Big Ten Task Force for Emerging Infectious Diseases and the Big Ten Sports Medicine Committee, it became abundantly clear that there was too much uncertainty regarding potential medical risks to allow our student-athletes to compete this fall.”

Neither automatic sprinklers nor heat waves dissuade the dedicated among exercisers

Mon Aug 17 , 2020
HOLD HOLD HOLD Rachel Kaldor has learned to put up with an unusual, minor inconvenience during her workouts: automatic sprinkler systems that spring to life at Land Park, where she exercises three times a week with Forest Vance Training. Like a number of other Sacramento fitness businesses, Forest Vance Training […] 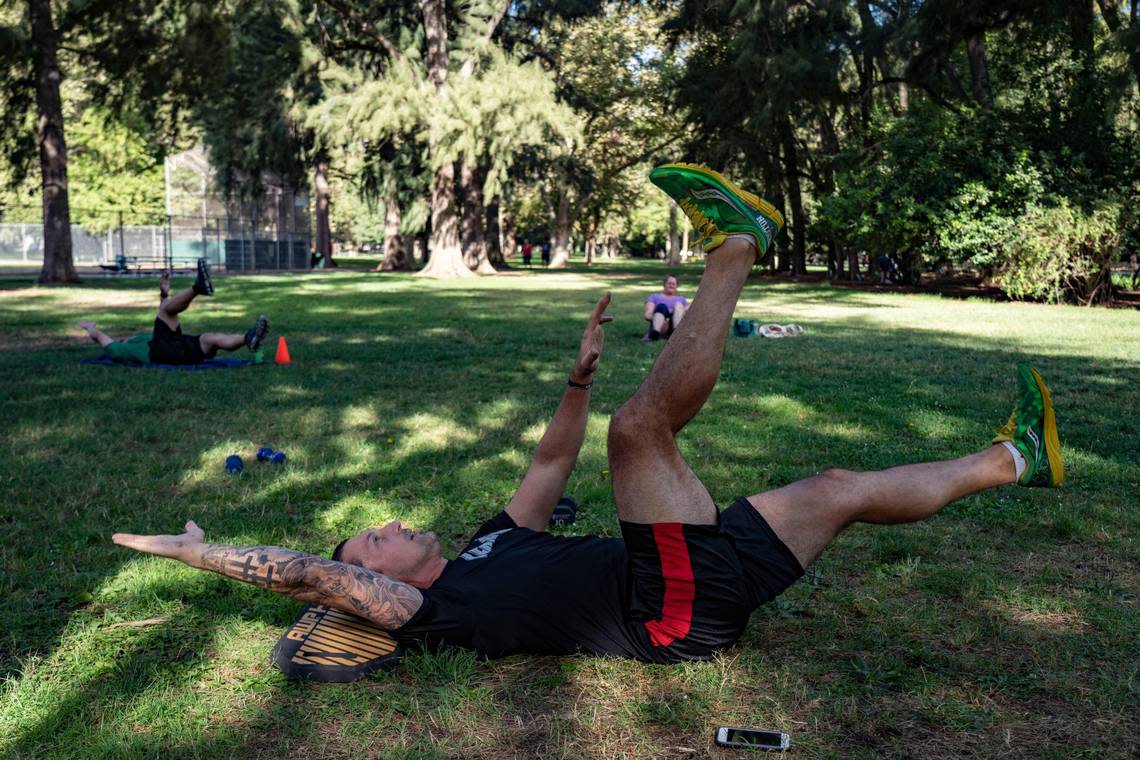