We’re here to guide you through the coronavirus pandemic. Sign up to the Life newsletter for daily tips, advice, how-tos and escapism.

Kainaat Siddiqi, 16, from Hounslow, is due to start sixth form in September, at a school that’s a 45-minute bus journey from her home.

Kainaat, who’s an aspiring doctor, chose the school for its track-record in helping students secure university places studying medicine. But the government has announced plans to scrap free travel for under 18s and she’s no longer sure if she’ll be able to afford the fare.

“I’ve been doing a lot of research into online schools or going to sixth forms closer to home,” she tells HuffPost UK. “I’m honestly really scared, I’ve always wanted to be a doctor. I know that if I have to move to a different sixth form it will lower my chances.”

In May, the government announced a £1.6bn bailout package for Transport for London (TFL), needed to keep services running amid the decrease in fare income caused by the pandemic.

As part of the package, the government said free travel would be “suspended” for under 18s – meaning the Zip cards frequently carried by young Londoners to access free or reduced travel will disappear. The details of the suspension, or how long it may last, remain unclear – sparking the hashtag #DontZapTheZip.

The government has said free travel to and from school will continue for children eligible, as identified by councils. However, thousands of families will now be expected to pick up the cost.

This will have life-changing impacts for children like Kainaat, who’s recently started a part-time job in retail alongside her studies.

“I come from a single parent household and my brother is working full-time to support the family. We’re definitely going to be affected by this and it’s going to be hard for us,” she says. “Now that I’m able to work, I was hoping to pay towards the house finances and take on some of my own bills at some point. Now, with free travel ending, I can’t help out. It’s just creating another set of bills.”

Sadiq Khan has criticised the government’s decision to end free travel as part of the bailout, with a statement on the Mayor of London’s website accusing the government of “making ordinary Londoners pay the cost for doing the right thing on Covid-19 and staying at home”.

But with the mayor’s words falling on deaf ears, teenagers are taking matters into their own hands. Joshua Brown-Smith, 14, from Lewisham, has launched an online petition calling for the government to reverse its decision, which has  already gained more than 198,000 signatures. A second petition, launched by 17-year-old Olivia Faria, has gained more than 150,000 signatures.

Meanwhile members of the UK Youth Parliament have written an open letter to the government, shared exclusively with HuffPost UK, calling on the government to re-evaluate their proposals and reinstate free travel.

Elia Yousf, 17, is the Youth MP representing Harrow and is among those who’ve signed the open letter. He’ll be returning to sixth form college in September and says the proposed changes to travel will make it harder for him to do work experience, or attend lectures outside of school.

“As a young person living in the suburbs, the end to free travel will make my ability to explore opportunities in central London far more expensive, which will reduce my accessibility to many different fields of work,” he says.

“This would take away opportunities for thousands of young people looking to find their foothold for future careers, significantly impacting social mobility in the capital.”

Elia is concerned that having fewer extra curricular opportunities might make his university application less competitive. He thinks the travel changes represent just one of the ways young people have been “forgotten” by the government.

“The severe cuts to policing and the mass shutdown of youth centres show us that the government has forgotten us young people and has set us aside,” he says. “The end to free travel is simply the nail in the coffin.”

They think they can take away our rights and we are going to be mute about it, but they’re wrong. Joshua, 14

Joshua, who started the #DontZapTheZip petition, shares Elia’s views. “Since the Conservatives have been in power, youths have been defunded down to the max, and now, to take away the only thing we have is wrong,” the 14-year-old tells HuffPost UK.

“Boris Johnson and the government have really underestimated young people. They think they can take away our rights and we are going to be mute about it, but they’re wrong.”

Joshua relies on his Zip card daily, to get to school, to volunteer within his community, to socialise with friends and to see family. He’s concerned about the financial implications for this family – and others – if parents suddenly need to pay for travel.

“Covid-19 has hit many households. Many parents have been furloughed or don’t have a job to go back to and we are going to school in September,” he says. “They’re saying young people need to take bikes to school, but a lot of people  don’t own a bike. If you use a Santander bike you have to pay a pound, plus we don’t know if the Santander bikes are regularly cleaned, so they might have the virus on them. It’s a careless statement.”

The teen is also unimpressed that the government is yet to respond to his petition, despite it being supported by the Child Poverty Action Group and reaching almost 200,000 signatures.

“They’ve been very mute so far – and I think it’s damn rude,” he says. “It’s showing everybody that they just don’t care. The rich will be getting richer and the poor will be getting poorer.”

All three teenagers share one clear message to the government: repeal the decision immediately.

“The government must repeal its decision before school starts in September as this is when the impact of such a reckless change is going to be felt by multitudes of young people and their families,” says Elia.

Joshua adds: “Boris Johnson really needs to use his head and collaborate with TFL and try to come to some agreement. They need to start working with Sadiq Khan, this should not be a political bashing to make the Labour party look weak. Young people should not be drawn into a political war.”

In a joint statement from the Mayor of London and TFL, a spokesperson told HuffPost UK: “Sadiq has been clear that ​suspending free travel for under 18s is unfair, could hit the poorest Londoners hardest and will place additional administrative and financial burdens on already stretched schools and ​local authorities.

“He is urging the government to drop this condition of the recent funding deal and instead work with TfL to find a better solution that doesn’t risk hitting the poorest Londoners hardest.”

A Department of Transport spokesperson told HuffPost UK: “The decision about under-18 travel is a temporary measure to help tackle the spread of Covid-19 and reduce the risk of crowding on our transport network.

“We have also ensured the concession for children eligible under national legislation for free home to school travel will continue.”

Until there’s a definite revoke, any words offer little reassurance to the teens facing uncertain futures.

“They’ve decided to look at the economy instead of how it’s actually going to affect me as a young person, when we are their future,” says Kainaat. “We are the future of this whole country and it feels like we’ve been left on our own.”

‘Their Story Is An Important One’: Lockdown Through The Eyes Of Teenagers

Can’t Wear A Face Mask For Health Reasons? Carry This Card Instead

‘Cheated Out Of Our Celebrations’: How Year 11s Feel Now School Is Over

This article originally appeared on HuffPost UK and has been updated.

How to project credibility as workplace meetings move online

Fri Aug 7 , 2020
Amid the global work-from-home phenomenon, what a presenter says carries more weight than ever. Getty Images COVID-19 has altered nearly every aspect of American life, including the workplace. For millions of Americans, the kitchen or the living room now doubles as the office and conference room. This workspace shift, likely […] 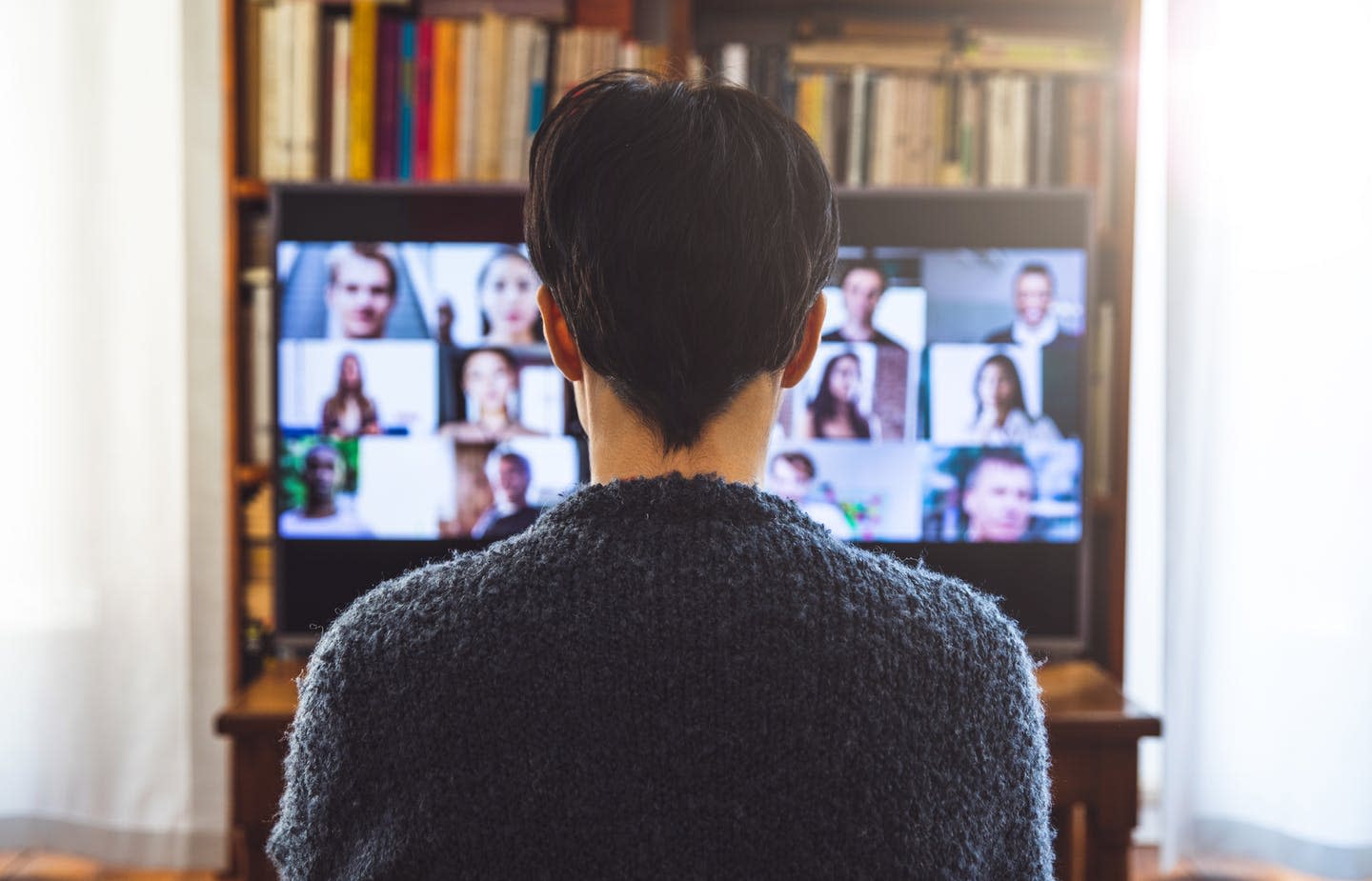